Most of her young fans might not recognize her, but Kristen Bell is a heroine to many for voicing Anna in the hit 2013 animated film Frozen.

The little girl took a deep breath, mustered up some courage, and approached Kristen Bell.

“My mom said you were an actress,” she said, seeming confused as she stared at the woman who’d given voice to Princess Anna in the animated hit Frozen.

“I am,” Bell replied cheerily. “Does my voice sound familiar to you?”

Bell engaged with the girl for a few minutes before returning to her lunch table.

“That happens quite a bit,” she explained. “Children just look at me with confusion, having difficulty wrapping their head around the idea you’ve separated human and cartoon.”

Such is the crux of being Kristen Bell. Yes, along with Idina Menzel, she starred in a film that enchanted audiences worldwide, grossing nearly US$1.3 billion in 2013. Or rather, her voice did. But she’s not exactly a movie star.

She’s had a strong television career, first endearing herself to a cult fan base as the snarky sleuth Veronica Mars and since starring opposite Don Cheadle on Showtime’s House of Lies, which started its fifth season this week. And yet on the big screen, she’s largely played supporting roles, like Jason Segel’s vacuous girlfriend in Forgetting Sarah Marshall,” or the straight woman to Melissa McCarthy’s brash CEO in her latest movie The Boss.

“I don’t need to talk to my agents all the time about where I stand in the acting community, because I’m pretty clear on where that is: I’m a strong B-level actor,” says Bell, appearing completely earnest. “That feels accurate – not too narcissistic, but also not too self-pitying. I’m totally fine being right down the middle.”

At 35, Bell says, her priorities have shifted. She’s married to fellow actor Dax Shepard (Parenthood), and they have two daughters, aged one and three. And her kids, she says, give her “a glorious amount of self-esteem and purpose”. She’s no longer haunted by whether she got a job, or botched an audition. She’s more practical about the work she takes on. She agreed to The Boss – which began shooting just 11 weeks after the birth of her second child – only because her family was able to accompany her to set in Atlanta.

Being a mother seems so integral to her identity that it’s difficult to imagine there was a time when she was uncertain about having kids.

“I loved my life,” she says, sitting at one of her favourite Los Feliz cafes a couple of blocks from her house. “Dax and I could go on trips. I had dogs that I could nurture. And I felt that pregnancy would be parasitic. I like my autonomy. I’m a spunky girl. I don’t like when people get the door for me. If I’m in a mood, I don’t want you to rub your hand on my back.”

But Shepard, who got sober 12 years ago, was keen on being a dad. So he suggested the couple seek out advice from their five most blunt, narcissistic friends with kids. 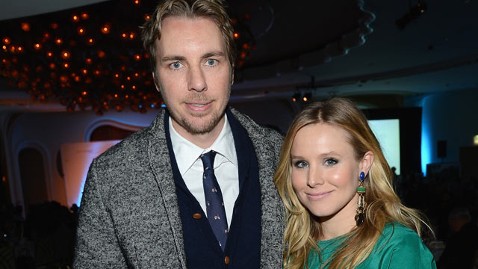 “And all of them, even the grumpy ones, were like, ‘It’s an unmissable experience’,” she recalls. “And they were right. It’s so fun. Pregnancy feels gross, and you can’t think about it, because it’s disgusting. It feels like you’ve swallowed a live trout.”

She laughed and noticed a pregnant woman sitting nearby – and began to tear up.

“I’m so stupid, because it makes me so emotional,” she says. “But that woman is about to turn a corner right there and meet the love of her life, and I know it, but I can’t explain it to her.”

Having children has also changed Bell’s relationship to her body. Yes, she’s still one of those annoyingly healthy types – she orders a bowl of Moroccan lentils and organic eggs for lunch, and when a waitress offers her a complimentary dessert, she says she has to abstain because she does not eat sugar. But she says she’s become more accepting of the way she looks.

“When I look down at my belly,” she says, lifting up her shirt and grabbing at her stomach, “I have a lot of skin. It’s all tucked into my waist right now, but I have all this skin, when my stomach isn’t full of lentils. And sometimes it’s saggy. But I’m determined to keep a healthy perspective about it. Because when I look down and see that in the mirror, it is a reminder that I did something extraordinary. It is a reminder that I have a superpower, and they’re walking around my house because of it.”

In The Boss, Bell plays a single mom – an overworked assistant to a demanding boss (McCarthy), who initially doesn’t value her. She’s so concerned with making ends meet for her daughter that she isn’t making herself a priority, as McCarthy’s character points out in one scene, teasing her for still sporting an unflattering nursing bra.

Generally, Bell says, she prefers to work on television, as most shows shoot in Los Angeles, and she enjoys the consistent schedule.

“Plus,” she notes, “movies have always felt a little bit like camp to me. It’s dramatic, you swear you’ll be friends forever, and most of the time, you’re not. TV feels like high school to me. I like the depth of relationships.”

But there was a more familial environment on The Boss, largely because Shepard is longtime friends with McCarthy and her husband, director Ben Falcone; they met while performing as part of the improv troupe The Groundlings.

“She and Dax are super nauseating,” jokes McCarthy, calling from the car with Falcone. “It’s nice to be around people that are happy and you can tell love each other. And she brought homemade cashew dip to work. And I’ll tell you what: If you want to keep the Falcones happy, you just bring in a nice bowl of cashew dip. Like, she’s perfect.”

“Sometimes it’s a little too far,” adds Falcone. “When the cashew dip was that good, I think my response was: ‘Really, Kristen? Really?'”

“Did you go home to your baby after a full day of work?” interjects McCarthy. “Just stop, you, with your glowing skin and your cashew dip. She is like the perfect person without being in any way actually annoying.”

Bell readily admits that she and Shepard are, indeed, nauseating – “even to ourselves”.

“I … love him more than I could ever articulate,” she says, actually using some more colourful language for emphasis. “But I made a choice to love my husband. I made a choice to be happy with him and be good to him and conduct myself in his presence exactly as I would in his absence. And he made exactly the same commitment to me. And in truth, accepting that we are on the same team is the source of our joy.”

Bell approaches her marriage the way she does her career, she says: logically. Her agents know that she doesn’t want to have lunch with them once a month. She’s not interested in strategizing: “Just tell me what jobs are available, and if it’s realistic, we can talk about it.”

“Hollywood’s a giant cage fight, you know?” she said. “The project has to be looking at you as much as you’re looking at the project for it to be a reality for you. I think especially young actors suffer from these cravings to be significant. And it’s a trick. You never feel significant.”

This is coming from a woman whose voice is on a soundtrack that has been certified platinum four times over and remains on repeat in millions of households around the world.

“That feeling never, ever goes away no matter how many jobs you get,” Bell says. “Just accept it and know that it’s a demon we all have. Once I did that, it just felt like freedom.”